It’s rare to run into a writer and coach living just down the road who gets excited about my travel memoir, Letters from the Pacific.  (I mean, we’re in remote Costa Rica here!)  Happily,  Amy Brooks was delighted to interview me for her podcast , Voice Pen Purpose online, instead of at  her kitchen table (she has three lively boys).  Thus, it is easily available to the anyone in the world who cares to listen, without distractions.  Which I invite you to do.  It’s a fun interview.  Enjoy!

I was stuck in my house during a recent hurricane and the only truly transportive distraction I indulged in was Homer’s “Letters from the Pacific.” I read by candlelight (no power) and forgot about the pounding rain and angry winds outside my hillside home. Her imagery is crisp and clear. The details both poetic and informative. I’m now fascinated by the idea of international travel via cargo ship. When can I go, too? This is an easy book to recommend; to either those interested in an exterior or interior exploration. Keep exploring, Shaw, and then tell us all about it!

In one case technical — and I am NOT a techie — but the engine room tour on my first freighter voyage begged to be described.  It was sensory overload — far too many details — and without creating endless lists of things, the challenge was to make it interesting, speed it up and come to a crashing finish.  Tell me if you think it works:

The Grand Event yesterday was our engine room tour, guided by the voluble Chief Engineer, Karlo.  It was one of the most impressive sights any of us had ever seen (although hot and noisy, even with earmuffs).  From the keel to the topmost access hatch, it rises 10 stories high, and aft-to-forward takes up 30% of the entire hull – add in the fuel storage tanks along either bulkhead, and it uses up more space than the cargo hold.

Lila had the good sense to bring along a notebook, and her jottings added to my memory and a further interview with the Chief, produced some remarkable statistics.  The eight-cylinder twin-turbo-charged main engine produces 35,000 horsepower at 91 rpm, and Karlo assured us that newer ships (this one is only nine years old) can produce up to 105,000.  To convey the scale of this monster, we saw two new replacement pistons hanging aft of the engine, still wrapped in plastic, each measuring five meters high, and we were told that the 7.5 meter diameter propeller weighs 45 metric tons.

Because bunker fuel is as thick as asphalt, it needs to be purified by means of an on-board centrifuge and then heated at 145C. to the correct viscosity before it can be burned.  The sludge that remains after purification is pumped into tanker trucks in port.  No unprocessed fuel, oil, or bilge contents go into the ocean.  (Neither does sewage.)  Because of European and West Coast U.S. environmental regulations, in addition to the 3,500 tons of bunker the ship has to carry low-sulphur fuel for use in those ports, as well as gasoline to use dockside.  With her tanks topped up, the Louise has a range of 15,000 nautical miles.

In addition to the main engine, there are four diesel-run generators, producing 440 volts at 60 cycles for a total potential of six megawatts (newer ships can produce up to 6,600 volts) and a desalinization plant that produces 25 tons of water a day.  This multi-staged water-maker, which includes mineralizing and treatment with ultraviolet light, produces all the water used on board for cooling, hydraulics, plumbing and human consumption.  The Louise takes on no fresh water in port.

Impressive also was the workshop and spare parts storage, including every kind of machine tool, a huge lathe, untold numbers of hand-tools – each in its numbered slot on the walls – shelf after shelf of steel boxes filled with every kind of fitting the ship’s engineers could possibly need, paints, chemicals, and numberless drums of oil.  As Karlo pointed out, there’s no handy machine shop out here in the middle of the Pacific.  He described for us, too, all the backed-up back-up systems for running the show, all computerized and far too complicated to recount.

In that vast space amid the hellish din of so many thousands of mechanical parts moving simultaneously at high speeds, surrounded by a labyrinthine complexity of ladders and hatches, kilometers of insulated wires and pipes snaking in every direction, valves, blowers, boilers, turbines, turbo-chargers, condensers, a steering gear the size of two small farm tractors, air compressors, a seawater central cooling system, block-and-tackle for moving heavy equipment around, and a 3,300 volt bow-thruster – with that enormous, panting, thrumming monster-engine at its heart – the steel planks vibrating beneath our feet with the eternal beat of the ship, the three of us stood open-mouthed in awe.

Anyone who writes faces a particular challenge with sunrises and sunsets, because it is so easy to fall into the cliche trap.  How to be original?  How to make the reader share in the wonder?  Here’s an attempt:

I woke early and pulled the curtain back from the porthole in time to see the sky just pearling up before sunrise.  I quickly dressed and climbed to my usual perch on the top step to F Deck, facing aft, a little northeasterly.  It was slow in coming.  First a faint pink lined the clouds, then a golden light gradually deepened along the horizon, and puffs of cloud over the indigo water turned from mauve, to rose, to bright pink.  The horizon clouds opened to form a rose-tinged bowl, scalloped like a seashell, and suddenly the sunlight poured into this bowl like molten gold, too brilliant to look at.  I watched for half an hour, at the end of which I fully felt the blessing of this diurnal gift to the planet.

Both these pieces are excerpted from Letters from the Pacific, my first travel memoir.

Letters from the Pacific

49 Days on a Cargo Ship
by Sandra Shaw Homer

Homer’s first book is an adventure story—the journal of her 49-day trip through the South Pacific as a passenger on the Louise, a cargo freighter. The author hates flying, and had no interest in a cruise ship’s gorging and gambling, so she decided, why not rough it? From Costa Rica to Australia and back, by way of Tahiti, Fiji, New Caledonia, and New Zealand, the Louise churned its 45,000 tons (cargo and author included) into the “open-ended silence of the sea.” Its passenger comes away with plenty of good stories to share along with “a decidedly unromantic view of the life of a seaman.” In Fiji, Homer missed out on seeing Raymond Burr’s orchids but did visit a pricey resort with “a man-made island in the shape of a giant footprint.” In former colonial islands, she discovered to her chagrin that “the French seem always to be French, no matter where they are.” The glorious and the grim are each delineated in detail, from the “foreign country of constellations in the sky” to the constant awareness that “a freighter is a noisy, dirty, smelly beast.” The aches and pains of travel are here in full measure: the cold of the ship, the pangs of arthritis in her knees, and the limbs barked against listing furniture. Because much of the journal comprises minimally edited diary entries and letters to friends, the reading experience can be choppy, especially since past and present tense mingle freely. But because of the immediacy of the reporting, Homer’s character—questing, worrying, laughing—comes across with terrific clarity. We come to know her well, or feel as though we do, and the curious world of cargo ports and the crews that visit them become even more intriguing through her eyes.

A detailed, rare, and rewarding ride over a watery part of the world. — Kirkus Reviews 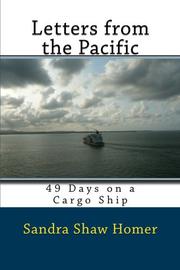 We need to tune in to all our senses when we’re writing so that readers can feel the full experience we’re trying to describe.  In writing about a container ship in Letters from the Pacific, I was able to use most of them.

In over a month, there has only been one occasion when we had the wind at our back doing more knots than the ship. The Captain assures me this happens only rarely. It creates a vacuum in front of the superstructure that sucks engine fumes right into the air-conditioning intake, and this makes your cabin smell like the inside of a gasoline pump. I awoke to this one night and lay awake for quite a while wondering whether I should call somebody to tell them the ship would explode if anybody lighted a cigarette. I opened my porthole to let in some fresh air but, since my cabin faces forward, the air outside smelled the same as the air inside. Eventually I assumed that, if there really had been a problem, somebody would have sounded the alarm, and I went back to sleep.

It takes a while not to be alarmed by the smells on board. There are places where you can smell the heavy, oily fumes of diesel; whenever anyone is painting – a constant battle at sea against the ever recurring rust – the chemical smell of the anti-corrosive paint permeates the superstructure; and just outside my cabin, at the head of the stairwell, I get occasional puffs of bottled gas wafting up from the Galley just like smoke up a chimney. A freighter is a noisy, dirty, smelly beast. I wonder how they hide all this on passenger ships.

There is the sweet smell of salt on the air. And, with the moon not yet risen, there is a foreign country of constellations in the sky.

You can smell the tropics. Out on deck in the dark, the stars faintly winking on and off as low clouds stream invisibly across the sky, there’s a new, heavy warmth to the air. I feel it on my skin, taste it in my nose; it’s humid, soft and kind.